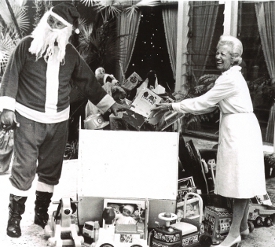 Ralph E Stevens, Jr., one of the founders of Stevens & Stevens, was Santa Claus back in 1985 for the annual Christmas Belles event. Mr. Stevens was actively involved in various charitable organizations throughout his life.

An article in the December 2012 eddition of Bay Magazine, a publication of The Tampa Bay Times, talks about the event which began in 1962.  Mr. Stevens is seen, in the image to the right, with Fran Futch at the 1985 benefit.

Bite-size edibles and sleighs filled with play things may appear to have little in common, but St. Petersburg’s Christmas Belles have made them the perfect pairing for half a century.

They celebrated that milestone in early December, orchestrating the 50th annual coffee for the Christmas Toy Shop.

The event takes place in a private home (Donna Holland Nagelsen’s this year), and the guest list comprises 500 women who contribute money and toys. Typically, more than 250 attend, many wearing their holiday best and bringing with them enough new items to strain several teams of reindeer. A Santa look-alike, usually the husband or son of a member or guest and known only to the Belle who recruited him, greets everyone on arrival.

Some traditions have evolved since 1962, when volunteers Ardith Rutland, Marion Speakman and Helen Waterman organized a group of friends to host the first coffee in the Waterman home.

“The emphasis was more on toys,” remembers Mary Wyatt Allen, One of the original 15 Belles. “It was a smaller thing. The emphasis on food and the sophistication and the Christmas favors all came later.

Food trends and matters of taste change over time, but many other details are unwavering. The food, a served entree, side salad,sandwiches, savories and sweets, is prepared in volume and presented atop white doilies on the Belles’ personal silver. Past Belles and additional hostesses pour coffee and champagne punch.

Each year, a group of four to six volunteers to organize for the next, selecting a host home, the menu, favors, decorations and a Mr. Claus. The Belles hold a tasting in September in which everyone brings samples of new recipes for consideration.

Rutland retired from the Christmas Toy Shop after 50 years and later from the Belles, although she continues to serve at the coffee. She remembers once preparing a shrimp salad that was not particularly well-received, but other offerings endure.

“Over the years, we have learned that there are perennial favorites that must be included, Belle Tina Douglass says. “Open-faced tomato and cucumber sandwiches and cheese bonbons are very popular. In past years, when we have opted to omit these in favor of something new and innovative, the guests have been quite vocal about the absence of their favorites.

In October, the group gets together to hand-address, stuff, seal and stamp the 500 invitations. In November, they assemble favors for each guest that reflect the category of one’s donation. For 2012, artists from the Morean Arts Center for Clay created a commemorative ceramic bell favor carved by Beth Morean and hand-crafted and glazed by Valerie Scott Knaust and Martin Bimler.

The day before the big event, Belles initiate preliminary set-up for the event, supervising the delivery of rental tables, china, flatware, urns, linens and potted poinsettias. Many arise before first light the morning of the coffee to prepare perishable foods for delivery at 9; some that will not hold for several hours are prepared behind the scenes during the event. A small army works out of sight of guests, cooking, garnishing, replenishing, coffee making and dishwashing. Others are greeters, favor distributors and door and step attendants.

And two hours later, when the party is over, Belles vacuum, return furniture to its proper place, pack up supplies and load gifts into Christmas Toy Shop vans.

“It is very gratifying to see the incredible array of toys, dolls, sports equipment, puzzles, books and games destined to make over 2,000 Pinellas County children so very happy on Christmas morning,” Douglass says.

In recent years, the event has raised more than $30,000 annually and sent hundreds of new toys to the cause, with the Belles’ themselves paying all of the expenses for the coffee.

The North Pole should have such elegant elves. ~

Special Thanks to Mary Jane Park, Editor of Bay and staff writer for the Tampa Bay Times.

Posted in Blog and tagged Interesting