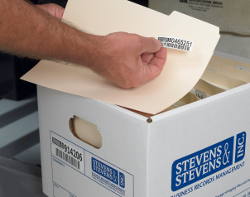 Did you know the first barcode was drawn on the sandy beaches of Florida? Available today are aps on smartphones for reading barcodes everywhere, and in 2-D which embeds a hyperlink to a web page! Savvy travelers use the IATA- standard 2D barcode for boarding passes. The barcode has come a long way since its first printed attempt as a one dimensional bulls eye. You can’t go anywhere without seeing the thick and thin lines.

Joseph Woodland the co-inventor of the barcode died Dec. 9, at age 91.  Woodland and Bernard Silver have been credited with inventing the readable stripes that revolutionized retail and many other industries around the world.  About five billion barcodes are swiped a day in 150 countries.  Their invention is one that has truly changed the way companies, across the globe, do business.  Conducting daily business in a Document Management Record Center would be nearly impossible without barcodes to tell us where to find an item, or where an item belongs that’s been removed from its container.

The first uses of barcodes was to label railroad cars but were not commercially successful until the automation of the supermarket checkout process.  Working as grad students from Drexel University, in 1948, Bernard Silver and Woodland, developed their first working system using ultraviolet ink, but it was too expensive and it faded.

After leaving Drexel and moving to his grandfather’s home in Florida, Woodland was determined to get the system to work. This next attempt was inspired by Morse code which he had learned as a boy scout.  While relaxing on the beach, he stuck his hands in the sand. “I just extended the dots and dashes downwards and made narrow lines and wide lines of them.”

To read them he used technology from optical soundtracks in movies, using a 500 watt light bulb shining through the paper onto a photomultiplier (tube from a movie projector).  After his patent was issued in 1952 he tried to get IBM to develop the system but they determined that the equipment needed was too far in the future.  The patent was sold to Philco for $15,000 who sold it to RCA much later.  In 1973, the rectangular barcode was promoted by IBM, after substantial design input from Woodland.

NCR Corp installed a test bed system at Marsh’s Supermarket in Troy, Ohio, near the factory that was producing the equipment.  On June 26th, 1974, Wrigley’s Juicy Fruit gum was scanned at 8:01 a.m.  for 67 cents.  The 10 5-stick packets of gum and the receipt are now on display in the Smithsonian Institution.  This was the first commercial appearance of the UPC.   The rest is history.

Woodland and Silver were inducted into the National Inventors Hall of Fame in 2011. Silver had died in 1963.    In 1992, Woodland, received the National Medal of Technology and Information, the highest U.S. honor for technological achievement,  by President George H.W. Bush, along with Microsoft founder Bill Gates and six others.