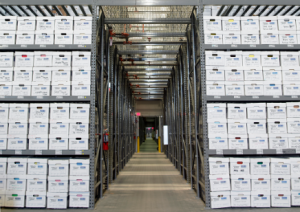 Exceeding Expectations
“When choosing our document destruction equipment, we wanted to ensure that our service exceeded all federal and state requirements relating to secure information destruction and that the process was environmentally friendly,” Rhett says.

The company selected a 125-horsepower shredder from Ameri-Shred, Alpena, Mich., which it says is the largest in the state. The shredder is capable of destroying 6 to 8 tons of paper per hour, according to Ameri-Shred, producing 5/8-inch strips. According to SSBRM, this particle size meets the requirements set by the National Association for Information Destruction (NAID), the Phoenix-based trade association for the information destruction industry.

“We wanted a shredding system that would provide customers with the peace of mind knowing their most sensitive business information would be securely destroyed,” Rhett says. “The key features we looked for in a shredding system included safety, warranty, reliability, service level from the manufacturer, longevity of the system and throughput.”

SSBRM was already familiar with Ameri-Shred, as it operates a hard drive shredder manufactured by the company.

Rhett says SSBRM expects to shred and recycle in excess of 300 tons of paper records per month using its new plant-based system.
Preceding Installation
Rhett says SSBRM used a multistep approach to prepare for the installation of its new shredder plant. “From the beginning stages of determining designs and layouts to analyzing and acquiring the appropriate permits, the Stevens & Stevens team worked together to make the shredding expansion a smooth transition,” he adds.

The company’s first step was to select the project management and design professionals it would use for the project. “During the design phase, we looked at the shred system and layout, the dust collection system, electrical service, concrete pit design, exhaust fans and compressed air,” Rhett says. “We then analyzed the existing fire-suppression system and applied for the necessary permits.”

SSBRM had to secure structural, mechanical and electrical permits in addition to a permit to modify exterior green space, Rhett says. “Since the building occupancy was deemed a ‘change of use’ from a warehouse to a shredding operation, the fire sprinkler system had to be inspected and certified that the coverage met code for the new use.”

The company also had to create openings in the rear masonry wall to accommodate the new exhaust fans for its shredding system.

“After ordering the new 480-volt electrical service and selecting the contractor, we moved into the construction phase,” Rhett says.

Because SSBRM’s shredding operation is in a different building than its records storage operation, the company also upgraded the facility’s door hardware and security alarms as well as the access control system as part of the shredder installation.

“Due to the sensitive and confidential nature of the information being shredding, our building was made more secure with hardware and security system upgrades,” Rhett says. “The door dead bolts and locksets were upgraded to a Medeco system, with the M3 keyway. Medeco is an industry leading security hardware manufacturer. The M3 keyway technology provides a higher level of antipick security, and Medeco keys can only be duplicated by certified Medeco dealers and only with the owner’s permission.”

Rhett adds that the new locksets always require a hard key for entry.

“All shredded materials are transported from the shredder to the baler via a conveyor belt,” he says. “This allows for an efficient paper flow from the beginning of the shredding process to the finished large, compact bales.”

In terms of his advice to other companies contemplating the addition of a plant-based shredding system, Rhett offers: “Do your homework by researching your market to determine the demand for shredding. Understand your needs and buy the system you can support.”

He continues, “Always select your project manager first. He or she will be able to coordinate the entities involved throughout the design, permitting, construction and startup phases. The project manager will make recommendations for the remaining team members based on matching the talent to the task.”
The author is editor of Storage & Destruction Business and can be contacted at dtoto@gie.net.