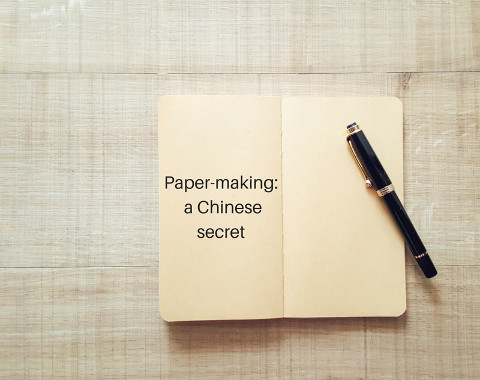 Paper, as we know it today, began as a closely guarded secret in China. What first comes to mind when talking about it’s history, is the ancient Egyptian writing material called papyrus. But the “true paper” we use today, thin sheets made from softened, individual fibers, began in China.

The inventor of this “true paper” was revered as the patron saint of papermaking. Chinese court official, Ts’ai Lun, experimented with softening the fiber of materials, such as tree bark, hemp, rags and fish nets, until each filament was completely separate. He mixed water with the individual fibers in a large vat, then sifted a screen through the water, which caught the intertwined fibers. This resulted in a flexible yet strong paper, which was called “Distinguished T’sai’s Paper.” Records show that he described this modern method of papermaking to a Chinese emperor in 105 A.D.

While the countries surrounding China eventually saw this “true paper,” they couldn’t figure out how to make it themselves and China didn’t willingly give up that secret. One story of how the Chinese secret of papermaking was revealed and spread to the west had to do with a war between Muslims and Chinese forces. In 751 A.D., the Chinese invaded Central Asia, but lost a battle against the ruler of Samarkand. Many Chinese soldiers were captured and, among those captured, were paper-making craftsman. To save their lives, they revealed the process of paper-making to the Samarkand troops. Legends says that is how Samarkand went on to become a hub for paper-making.

While paper was a wonder of the world, many people today wonder what in the world to do with all the paper we produce globally and how to securely dispose of paper containing valuable and confidential information. At Stevens and Stevens, that’s where our own story of paper comes into play. We can provide secure climate controlled storage of those papers or, if you prefer to scan and dispose of the papers, we do that as well. Our destruction container collection service offers a convenient solution for the secure disposing of paper documents. First, we provide you with a locked secure destruction container for your place of business. We assign a screened & trained team member to come and collect your container on a regular basis.  The documents are then destroyed meeting AAA NAID standards, and finally upon request, Stevens & Stevens provides you with a Certificate of Destruction.

So what happens to the destroyed documents? The documents are then chemically treated, reduced into a pulp or slurry, dried and then recycled back into paper once again, and so the story of paper goes on and on and on!

Posted in Blog and tagged Interesting