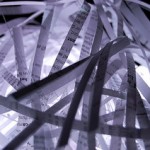 Over the holiday some of you may have heard about shredded police documents raining down on Macy’s Thanksgiving Day Parade in New York.  WPIX reported that the shredded documents, being used as confetti, contained Social Security Numbers, Dates of Birth, banking information and other highly confidential information.  Some of the documents identified Nassau County Police detectives by name, including some officers who are undercover.

“There were thousands of pieces of white confetti paper all around us. We just picked up a handful and started going through it and we noticed there were more Social Security numbers, more address and phone numbers,” Finkelstein said, MyFoxNY.com reported.

An investigation into the issue is currently underway.

As we get back to work today this story reminds us how important it is to properly maintain and destroy our sensitive documents.  Having a shredding policy is obviously not enough.  The proper and secure destruction of the shredded material is also important.